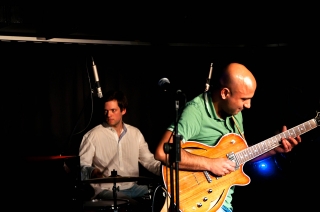 The “Amir Nasr Quintet” was founded in 2008 and consists of Amir Nasr (guitar), Max Schweder (saxophone), Rupert Schnitzler (piano), Milan Kappe (bass) and Daniel Knop (drums). In April 2009 the quintet was a nominated pricewinnar of the “Jazz Competition” during the “East Of Eastern Jazz Festival” in the Netherlands, as well as in december of the same year where the band was nominated during the international Jazz competition “Jazzprix” in Germany/ Czech Republic.